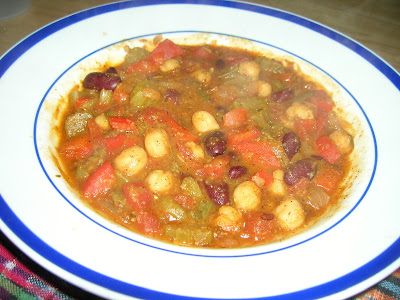 When I lived in Loves Park, Ill., I used to joke that I was a recovering Texan. This didn't make me a Yankee or a sell out, nor did my triumphant return (em-bell-ishhhhh...) make me some sort of carpetbagger. What it makes me is someone who readily admits he was more than a scosche homesick, and, using the addict terminology, made it to the sixth step of 12 and happily relapsed to his Texaholic ways for good.

That said, don't cha go thinking that it's a major love fest down South. No, sir. There are some things I could do without. For instance, I love Tex-Mex cheese enchiladas, Shiner Bock and Dallas (but not all Dallasites). On the flipside, I can't stand Southern fried okra, Lone Star and Houston (but I do like most Houstonians). These acknowledgments don't make me any more or less of a Texan. However, one simple disagreement divides more than the others: chili.

It's pretty simple — to bean or not to bean. True natives say, "Hell no. More meat." I think that's just narrowminded and not keeping with the cowboy tradition ("Blazing Saddles," anyone?) Beans are essential. You don't have to go overboard, but some kidney, navy or black beans (or even chickpeas) make a world of difference.

So, what's in my perfect bowl of chili? Well, I don't have any aspirations of going to the Terlingua chili cook-off (I'm told they shoot vegetarians first, ask question later), so I go nuts with beans. This 'un appeared recently in DMN, and I knew I'd love it, mainly 'cause chickpeas — or the infinitely more fun to say Garbanzo beans — have become a staple for me. The addition of red peppers is pricy genius, but worth it.

The suggested cous cous makes a great platform for this dish, but it's not essential. You can crumble crackers and top with mont-jack for repeat servings (as I did for a couple of reheats). Or, as the pic shows, you can just ladle the good stuff into a bowl and go back from whence you came, eating and smilin' all content with your fancy-pants liberal bean-eatin' self.
Posted by Robert Tracy at 8:29 AM

I'm going to Marfa this weekend to check out the Marfa Ghost Lights, and am most likely going to swing down to Terlingua (VIVA!) and see if I can rustle up come chili with beans. Have I told you of my single-woman-living-alone love affair with beans? There's nothing like savoring some of them babies, and sitting around squirreling out your own brand of poisonously noxious vapors - ah, it is truly a rare pleasure in life. Nothing quite like your own brand. I would have to say BEANS are way more effective than meat in this regard. I will bring you something special from Terlingua - perhaps a bottle of my "bean perfume." haha. Jk.

Marfa: Consider me jealous. I've heard mixed reviews on the lights. I'm impressed by little more than the spec-crap-tacular Christmas lights down the road from me. The mysterious Marfa Lights might floor me.

Beans, chili, flatulence: All this talk brings Bean-O to mind. I'm always amused when I see it at the grocery store (it's hard to shake that 13-year-old's sense of humor). I expect nary a thing from your travels ... but if you must, I prefer obnoxious to noxious.

I think it's hilarious Bob that you take pictures of all your food. I never knew you ate so much! We never saw you eat when you were here. ;D
I am enjoying reading about your culinary adventures though. :) I think you're inspired me. I made chicken enchiladas tonight for Scott with a cream green salsa sauce. It was yummy. Tomorrow is Beef stroganoff and later in the week I'm going to make korean short ribs in the slow cooker. There must be something about design and food that go together.
Hope all is well señor. :)
MM

Yeah, things are definitely different down here (food, weather, whatnot). Maybe I’ll take some pictures of animal crackers for old-times’ sake. I hope the snow isn’t too bad in Rockford.

Sorry to do this but ...
Tag. You're it. [ you can choose to play along or not, I feel obligated to do this for some reason. call it blog karma. :D ] See my blog.