I got into a serious breakfast habit when I lived in Rockford, and all it took were some bone-chilling conditions.

I won’t lie: That first winter kicked my ass — a wimpy ass clad in multiple-multiple-multiple layers. On the worst days: thermal underwear, wool pants and socks, a couple of shirts/sweaters, thick-as-a-brick gloves, leather jacket, -40 degree boots, scarf and wool hat. I almost bought a balaclava, not to be confused with baklava. No, sir, it would not be inaccurate to say I looked a whole lot like Randy Parker— Ralphie’s overly bundled younger brother on “A Christmas Story.”

The second winter, while worse, was more tolerable. Sure, it was colder, the snow was deeper and my pleasant spirit was packed in boxes with shorts and an oscillating fan. But my blood was thicker. I invested in a space heater. I discovered the power of rolled oats. Hell, I played ice hockey on the frozen Sinnissippi Lagoon when it was a balmy 12 degrees. I firmly believe this would not have been possible without ... oatmeal! The breakfast of aged hippies, Wilford Brimley and less-famous fogies! It’s great. In fact, I still pour a few bowls a week. The trouble is, well, it’s just a bit boring, even when I add bananas, raisins, yogurt, brown sugar ... you get the picture. But thanks to my second favorite kitchen appliance — my waffle iron — oatmeal goes from bland to badass in no time.

My first batch — Oatmeal-Walnut-Raisin waffles — rocked. It had a great texture and crunch. It was a warm, filling and just all-around awesome breakfast.

That recipe is great, but it can’t hold a candle to the big brother of badass Belgian breakfasts ... Pumpkin Waffles. 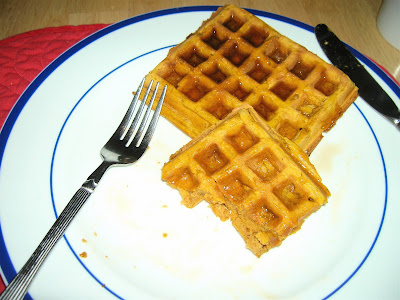 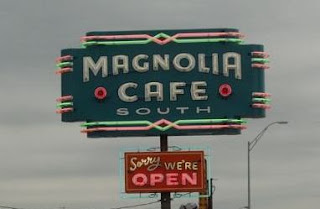 Uh-huh, it’s another VWaV recipe. And every novice cook has raved about it on the PPK forum. I am happy to join the club. By comparison, as much as I love Magnolia Cafe’s Gingerbread Pancakes, these are even better (lighter, better after freezing and cheaper)! Served with coffee, syrup and NPR, I’ve got a new morning staple.
Posted by Robert Tracy at 7:47 AM

I knew that when I noticed your genius in massacring pineapples in San Angelo that you were destined for food blog greatness.

Oh, man! I scratched my head over this comment for a few minutes. I'm happy to say I finally remembered slaughtering a pineapple one evening at a shin-dig at Wellington Place. I am confident a good deal of adult beverages were sacrificed that eve, all in the name or revelry.

Also, you should stop blogging about food, because I'm compiling a list of things I want you to cook whenever I come and visit.

You make the list and I'll make the food. And that's a promise.

Ahhh, so you speak from experience as you happily defend the pineapple easy slicer that I bitch and moan about for being a stupid wedding gift.

Dear cooker-o-good-grub, why dost thou toil away at a menial task like journalism when clearly you should be some kind of Foodnetwork/A&E hybrid host, discussing good skin art while you make vegan magic?

I love your blog, but it somehow makes me feel less of a woman, because, while I can accessorize(not the gay-est word) beautifully, I'm not much of a cook :(
PS. thanks for the help Saturday!!!

You're welcome. I actually like helping people move. Weird, huh? Packing and unpacking boxes — I'm less of a fan, particularly when it's my stuff.

And thanks. TRECE TV? Maybe. ... For certain: I am working on solving the newspaper industry's biggest problems: the cost of paper and shrinking circulation. Methinks it's high time readers enjoyed their coffee and their paper in the morning. Yes, edible publications. Embrace the future of news and cover it with jam (black, white and red/read all over).