On bikes and biscotti

Yesterday was a fantastic day. I hopped on the ol’ road bike for the first time in about two weeks. Running, going to the gym, baking and my stupid hand have limited my wheel time to straight commuting to the Trib. It was nice to put on some real miles again. Of course, no outing would be complete without a flat. It happened late in the ride, close to my house and I was more prepared than a Boy Scout (tubes, patches, pump), so it wasn’t devastating.

I also tried a new recipe: Blueberry Blondies, a tweakin’ of VWaV’s Raspberry Chocolate Blondies. This recipe was a blast to make, but I definitely screwed up the top layer. However, I learned from it, coworkers still devoured ’em (great compliments, offers for swaps and ideas, too) and managed to not take a single picture (trust me, these blondies were some ugly ducklings). 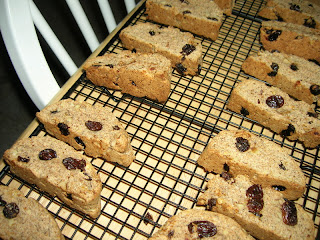 When I see food like this, I think about getting a pet. If I can't have a Bassett, maybe I'll get one of the Muscovey ducks, unless they're on the endangered list.

I don't think Muscoveys are endangered. I learned the other day that they can't quack, which makes them an even more attractive pet! Hell, cousin Matt had a duck. Why not?!?