I had a great weekend. My dad was in town. Of course, I had to work, but it wasn't a problem, even with all the homecoming craziness going on in and around Baylor. We managed to eat at some of the better spots in the city (World Cup Cafe: try Kathy Wise's Lentil Burger; Food for Thought: Mucho Burrito!) and avoid crowds (except at The Olive Branch). 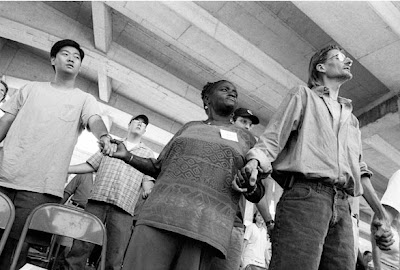 Sunday started with some killer Oatmeal-Raisin-Banana waffles I made the day before (even better a day after freezing then toasting them, just as "Vegan with a Vengeance" promised). Sunday ended with Church Under the Bridge (Photo by Matt Lester), which I hadn't attended in awhile, then it was off to work.

Sorry, I don't have any pics of the aforementioned waffles — they came and went quickly. But don't fret: my next cooking kick will start this week, and it will involve lots of pumpkin (brownies and waffles) and soup(s). 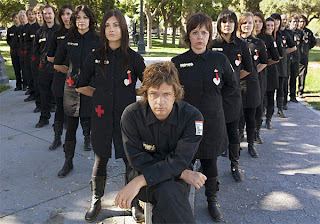 Anyway, it was a great weekend. and I'm looking forward to this week: Polyphonic Spree and Rooney on Wednesday in Austin. I also need to start planning Thanksgiving (I'll have three days to enjoy this year). I've got a lot to be thankful for ...
Posted by Robert Tracy at 9:51 AM

If you make pumpkin soup, make sure to make it with some cream. I made butternut squash soup, and I made the mistake of only using vegetable stock, and it wasn't as good. It was still yummy, homemade, pureed butternut squash soup is always yummy :), but it was lacking in that certain homeyness that cream or milk gives. My two cents.
MM

Thanks for the tip. I'll definitely remember it when I get around to making a squash stew. My first soupd to tackle are black bean and lentil.

I still find the Polyphonic Spree/Rooney tour to be one of the strangest combos in a long time. Something tells me those 5 California surfer dudes have no clue what is going on and are constantly asking "why are there like 29 people walking around backstage? Are we still high? Wait, we're Rooney. Of course we are high."

No kidding. It is an oddball pairing made especially strange with the militant look the Spree has adopted. I don't really care for Rooney, but I might be impressed. Optimistic I s'ppose.