Inspired by a comment from a former coworker and mega-knowledgable musichead Collin Quick, here’s a rundown of three places where you can max the hell out of yer credit cards in Dallas County. I say Dallas County because, quite frankly, eff all that shite in Collin County. You’re a cool guy Collin, but Collin County (Plano, Allen, McKinney, Murphy, etc.) is bullshit you can miss. 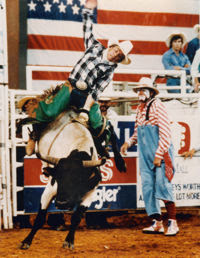 TOWN EAST: If you like tall aqua-netted hair that's perched atop pretentious heads, or if ya got a teenage hooligan cousin, Town East in Mesquite can't be beat. Technically not in the mall but it’s smack dab outside, getyer boots and hats at Sheplers. Then you can hop on LBJ (IH 635), drive to the Resistol Arena for the Mesquite Championship Rodeo (shoot the shit with Don Gay, chew some chaw and kick some shit with yer fancy boots) and then stop a spell at Trail Dust Steakhouse to get yer grub on (wear a bolo tie to eff with the staff).

THE GALLERIA: I can't even sniff the air of this royal retail palace 'cause my nostrils are of a far too low caste. However, if I managed to get a job in the building, I'd probably be a skating instructor. My goal wouldn’ be helping young sparkies land skating tricks. Oh, no, no, no, no. I’d be far too busy trying to land an SUV-steerin, Dolce-wearing sugar momma. Just my type. Right.

NORTHPARK: It’s huge but wears it well. It’s not like the Mall of America in Minnesoter. No, sir. Texas is about being big, but the well-to-do set doesn’t like to brag about such things. Still, this spot is intimidating in other ways, namely the SMU co-eds, generally successful people and their University Parks offspring are smart, in shape, attractive, rich and are good, reasonable people. But I digress. The food options here are amazing. Even the standard food court is about as classy as those places can be. The mall’s color and shape coding is so smart, but most first-timers still get lost.
Posted by Robert Tracy at 12:00 PM

What a great way to start my Saturday of TMC-ing. Waking up to find my name hyperlinked in your blog!

Dear, God! TMC!!! Three letters I loathe. I'd be a fool to miss the chance to say, "TCB on TMA-D, bro." Zoned periodicals and Elvis — legends in their fields!