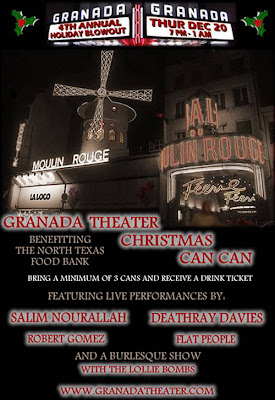 I spent half a day in Dallas on Thursday. It was a cool, ghosts of Christmas past tour. I didn't make it out to G-Town, cruise Centerville, Saturn, Broadway or Northwest Highway for covert places to smoke cigarettes (2008 will be year six as a non-smoker) or pick up all the lovely ladies at Town East Mall. No, I passed on all that fun but managed to hit up some old stomping grounds in Dallas (Greenville Ave., mostly) and saw some old college friends from the Timado days.

Flat People's eponymous CD — available for purchase at CD World and Good Records — was the soundtrack of the day. The band's show at Granada was great, and it was good seeing old Timado friends Graham, Warren and Bobby G. doing their thing on stage. I was very impressed with the venue and the group's cohesive sound live and onstage — which wasn't surprising at all. They're all ridiculously talented and are just great guys. Even Ryan Hardy (also Timado — Laser Eye) made it to the gig. It was good chatting with him and the rest of the guys after the show and catching up since the last time we were all together about three years ago.

Bob, I think I want to visit JUST to see you pick up the lovely ladies at East Town Mall.

I'd sit back and watch, learn, and then hone my skills and try to pick up some of those lovely ladies.

You bet. And, you've inspired me, Collin. It's high time I write about shopping in Dallas!