Separation of church and stage 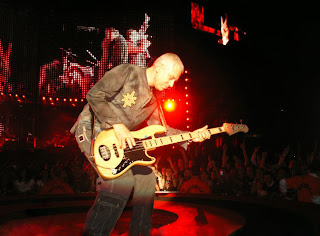 Blessed are the bassists, for theirs is the kingdom of awkward facial expressions.

So I went to a “U2charist” service on Sunday. In a word: meh. OK, so that’s not officially a word. But all in good time. C’mon, if Meriam-Webster recognizes “w00t,” I get to validate “meh.” Besides, U2charist is quite a little buzzy pseudoword, ain't it.

Anyway, my thoughts. I think the service I attended with my friend and coworker Wendy really lacked atmosphere. In a fairly small and bright room that formerly served as a library, the U2charist failed to move me (toe-tapping and swaying aside), wasn’t uplifting and it didn’t bring me closer to God. Not that I expected all or any of that. It was just flat.

I imagine in a dark, old chapel with dimmed lights and candles, a U2charist could be really cool or — even better — a powerful experience. A huge screen for projecting the DVD footage, a media person controlling the media (the pastor at St. Alban’s was doing double duty) and a gaggle of die-hard U2 fans — all would help the experience. I'd even suggest not using old "Rattle and Hum" and recent concert footage. I think U2 songs playing over projected, powerful images of faith, humanity, strife, etc. would be preferable to performance footie of Bono and Co.

As a musician and fringe member of the ADD generation, I was too focused on what kind of bass The Edge plays on "40" (one of Adam Clayton's Lakland basses, for the record — Clayton plays one of "David Howell Evans' " 1970s era Strats to complete the switch in roles on the "War" track).

So, I think the U2charist is too much entertainment, not enough God. It might be OK for others, but it’s not for me. However, the offering does go to a good cause, so I don't feel like I wasted an hour. It's worth checking out.

For more info on the phenomenon, check out my friend and former coworker Mike Plunkett’s write-up at The Norman Lear Center.
Posted by Robert Tracy at 7:22 AM

If it helps, the first U2charist was held in just the kind of atmosphere you describe -- St. Mary's Outreach Center in Baltimore, Maryland, which is a Gothic church building now adapted to allow the movement or removal of pews and all kinds of other flexible-space configurations. And it was held on April 17, 2004 -- before U2 had released any of their concert films on DVD, I think (or was Rattle and Hum out? I don't remember).

In other words, we used no videos of U2 themselves, and I don't think there were even any still photos of them used in the service, except for at the very end after the dismissal, when the cover of the book Get Up Off Your Knees, which has the band (well, except Adam) in shadow profile. As I recall, all imagery shown was evocative imagery related to the song lyrics, prayers, or bible readings.

And we did it entirely with live music, which was nice in a bunch of ways: we could change the key to make it easier for people who aren't tenors to sing, we could remove long guitar solos and other parts with little congregational participation, we could do things like have spoken prayers and blessings in the middle of a song, and we could do what U2 do -- improvise on the spot to draw out something that the congregation is clearly getting a lot out of, include more spots for call-and-response singing, and so on.

If you'd like more information about how the U2charist started, how it spread, and what it's about, feel free to check out the U2charist resources page, or go directly to the U2charist FAQ.

Thanks, Sarah. Your presentation of the U2charist is exactly what I had in mind — and I'm fairly certain a write up on your original service is where I first heard of the concept. Also, your site is packed with good stuff. I enjoyed your thoughts on "U23D" (next on my must-see list) and I think I will check out "Get Up Off Your Knees." Thanks!