CARRY THE LOAD, RIDE THE ROAD
Remembering those who paid the ultimate price; cruising through Mesquite 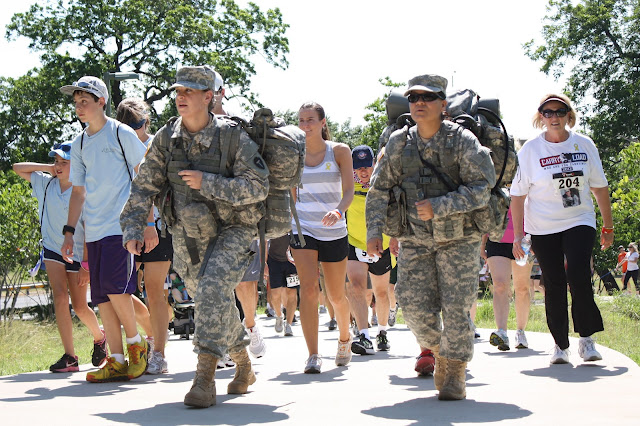 Memorial Day. What does it mean to you? A day off from school or work? Time to spend with friends poolside and grilling? If so, you're not alone. And that's why Clint Bruce founded Carry The Load in 2011.

Memorial Day (formerly Decoration Day) is a federal holiday on the final Monday of May when we are supposed to remember and honor the men and women who died serving our country. Bruce — a former Navy SEAL, South Garland High School alum and Dallas resident — sought to reclaim Memorial Day by getting the community involved in recognizing not only members of the armed forces but also fire and police department on Memorial Day. Last year, he and about 400 people walked around White Rock Lake for 20 hours to honor those who have died serving America.


This year, CTL is taking place at Reverchon Park. Participants are walking from the park along Katy Trail; some will walk overnight — all 20 hours — most with packs loaded with additional weight representing those who paid the ultimate price. In its second year, there are two official events happening today and tomorrow — one in Tampa, Fla., and Dallas. This year, the goal is to raise $500,000 for charitable organizations that benefit veterans, active duty military and officers. It's an impressive tribute, one that I look forward to seeing grow each year as we reclaim the original intent of Memorial Day.

Quickly, I had an absolute BLAST on Saturday riding 100 km through Mesquite, Seagoville and off-the-beaten path areas of South Dallas County. The organizers and volunteers at the Mesquite Rotary Ride put on a great race — excellent work especially by the officers manning the intersections and the volunteer groups working at the rest areas on a hot-hot-HOT day (93 was the official high at D/FW International Airport). 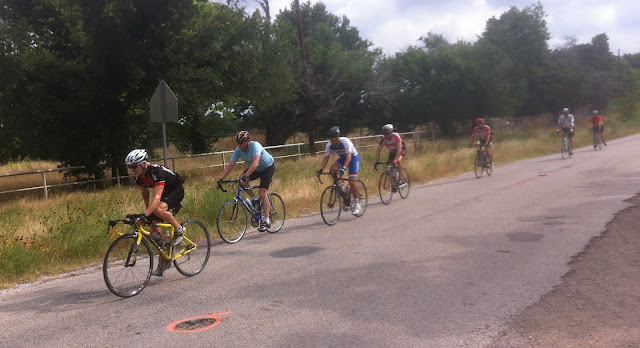 The route was mostly flat with some moderate descents and maybe 10 decent climbs (felt like an effin' mountain goat on those). And, as the photo above shows, there was a slew of potholes and cracks along the ride; without exception, they were all marked — so no surprises. Nice work, MRR!

I finished comfortably in four-and-a-half hours, with plenty of energy left, which makes me feel confident about the upcoming 100 mile rides. Now, I know what you're thinking: That's great and all, but did you see any farm animals? 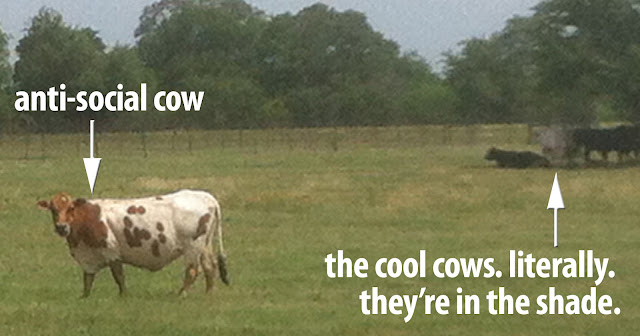 And perhaps he isn't anti-social, maybe he's (she is) heat training for a summer of, uh, standing. No shade for this acclimating bovine!