I haven't played in a band for about three years. Sure, I've done the occasional performance with choirs and friends, but nothing permanent. The last group was a less-than satisfying experience in Denton. It was a lo-fi, hipster affair that never really got off the ground. Oh, but you better believe there were lofty, unrealistic hopes! Plenty of daydreaming, little action.

Nowadays I just piece together ideas on GarageBand and my processor/looper. For me, creating a melody from scratch is especially difficult. So the process is a frustrating good exercise. See, I'm excellent as a collaborator — I dig being the glue in a musical setting. That's what's beautiful about playing a rhythm instrument. I'm comfy grooving in the pocket with a drummer on practically any style (please don't make me play Tejano).

Anyway, I've tried to re-create scenarios before, namely doing part-time work in music ministry — great success in the Midwest (photo above), miserable mess in the Metroplex. A big piece of the issue is faith vs. religion. I tend to have a lot of the former and a wavering view of the latter.

Going to concerts and watching performances on TV make me itch to give it another go — peruse Craigslist for potential bandmates, put out feelers, etc. However, I know at the moment I have enough on my plate to keep me happy, and the last thing I want to do is spread myself too thin. Perhaps after the summer cycling season I'll pursue music opportunities. 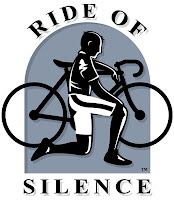 The 10th annual bike ride to remember and honor cyclists who were killed by motorists, to raise awareness and promote sharing the road. The inaugural ride was held in 2003 at White Rock Lake to remember Larry Schwartz. (Read a long but worthwhile account by Chris Phelan at the DMN's Health Blog.) Since then, it has grown into a worldwide event. There are multiple rides in the Dallas-Fort Worth area; I'll be at White Rock at 7 p.m. Wednesday with about 2,000 other cyclists who are fortunate to not be among the 600-700 cyclists who die annually in accidents with motorists.

Daydreaming is good for the soul. Just don't get so caught up in your dreams that you forget the action. Some dreams are worth the effort!

Yep. Violator will be at the Plano ROS and I have plans to be in Dallas with friends. Maybe we'll see you out there.

And no Tejano? Crazy man. The more accordion the better!