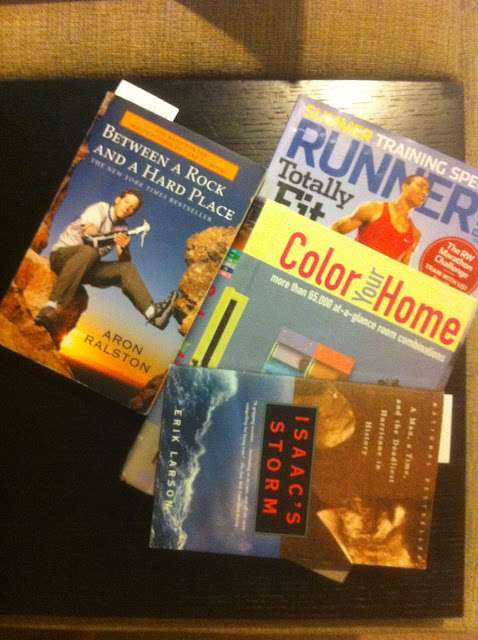 As of late, I've spent a fair amount of my non-running, non-riding, non-concert-attending, non-working waking moments catching up with a handful of books I've neglected.

After finally reading "Breakfast at Tiffany's" (I liked it much more than I anticipated; Holly Golightly is a remarkably captivating character), I am nearing the end of ...

• "Between a Rock and a Hard Place": Aron Ralston's cautionary tale is a well-written retelling of the escapades that cost him friends and nearly cost him his life on more than one occasion. The movie "127 Hours" (which I saw when it was released in 2010) is fine; but as is often the case, it doesn't present the full story. Reading Ralston's ordeal will make you eager for a fresh adventure and remind you how fragile life is and how valuable your relationships are.

• "Isaac's Storm": The city of Galveston was well on its way to becoming a world-class cosmopolitan city before a massive hurricane slammed the city of 37,000 people on Sept. 8, 1900, killing more than 6,000 people. Author Erik Larson pieced together survivors' documented memories, telegrams and letters to create the timeline and recount the deadliest U.S. natural disaster. Reading "Storm" has been slow going; it's interesting, but easier to put down than "Between a Rock."

I don't really have to explain Runners World, do I? Reading about running is good fun and I've collected some valuable tips, but I most likely will not renew my subscription. I'm sorta getting RW fatigue; standard advertiser-friendly gear reviews and department pieces make for stale reading, with only an occasional inspiring story peppering the pages of RW.

And then there's the color book. Debating painting my home's interior is a semi-annual event. Some day, I may just do it. Or maybe not. I haven't decided (Get a load of that indecisiveness, folks!)

What's next: After languishing for three months on the Dallas Public Library's waiting list, my name is at the top of the queue for a copy of Nicholas Carr's "The Shallows: What the Internet is Doing to Our Brains." And sooner or later (definitely before the MetroPCS Dallas White Rock Marathon), I will read Scott Jurek's "Eat & Run."
Posted by Robert Tracy at 3:12 PM

Capote, huh? My you certainly have great taste in literature.

Runner's World. It's a beautiful publication but yes, I ended my subscription a few years ago. Partially because I'm frugal but mostly because I wasn't getting anything out of it. I feel like this somehow makes me less legit.