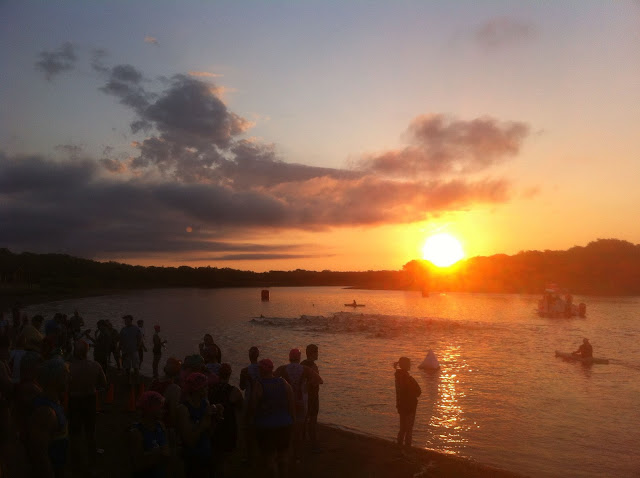 Beautiful, isn't it? That's the sunrise that greeted me at Take On The Heat Triathlon last Sunday at Frisco's Hidden Cove on Lewisville Lake. I wasn't competing; I was spectathleting. Watching these impressive athletes put their all into swimming, riding and running was nothing short of spectacular.  For details of the race, you can catch recaps written by two podium-placing tri-badasses — That Pink Girl and TriGirlruns42K. I highly recommend cheering at a tri. I can't wait to attend Ironman 70.3 Austin in October!

I have biked all over D-FW lately, including from my house in Lake Highlands to Frisco for the triathlon (64 miles round trip) and D/FW International Airport (70 miles roundtrip, taking back roads). If you are interested in the D/FW loop, I highly recommend it. The route around the airport is very nice — well-paved and mostly shouldered, and there's surprisingly very little traffic. Bonus: The jet engine noise is not nearly as loud as you would expect. The downside: There's very little scenery to appreciate, except for planes and hangars. 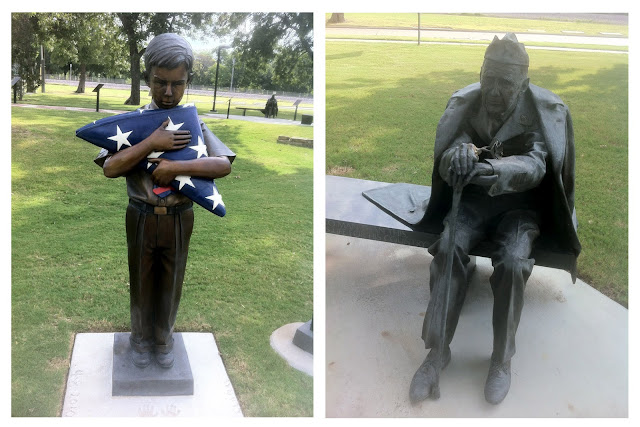 En route to D/FW, I pedaled through Farmers Branch. I must admit, I've spent very little time in the city. In fact, practically all the time I've spent in FB has been at the Dr Pepper StarCenter, skating and shooting photos of high school hockey teams and the occasional Dallas Stars practice. Anyone who has driven past the StarCenter off Interstate 35 no doubt has seen the massive American flag flying near it. Didya know the 60-foot by 30-foot Star-Spangled Banner marks Liberty Plaza? You do now. This park honors those who defended America. It's a simple yet touching tribute, one that the city is still raising money to complete.

I especially like the sculptures. The first is "Field of Blue" by Colorado sculptor George Lundeen. The plaque at the base says: "Dedicated on April 19, 2010, in honor of the families that support our troops." As a former Scout who learned how to properly fold a flag, I really like this sculpture and can appreciate the sentiment Lundeen created. I neglected to gather information about the veteran sculpture, but I like his expression; you can see the effect of war on his face. 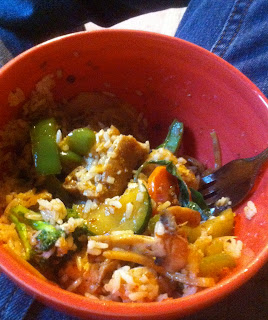 There's nothing better than having a delicious meal after a long ride or run. Lucky for me, the best Thai restaurant in town — Tukta Thai — is practically a stone's throw from my house. What's good there? Every friggin' thing. I recently ordered Thai Country Hot and Spicy (perfect tofu!) for carryout and proceeded to make it my lunch and dinner. It's so good. I guarantee anyone who looks past the location's strip shopping center sketchiness will be rewarded with good eats, excellent service (BYOB, too) and the opportunity to work on your golf game. Yep, there's a putting green inside the restaurant. Seriously. The owner installed it for his daughter so she could practice. I'm told she is a pro now. 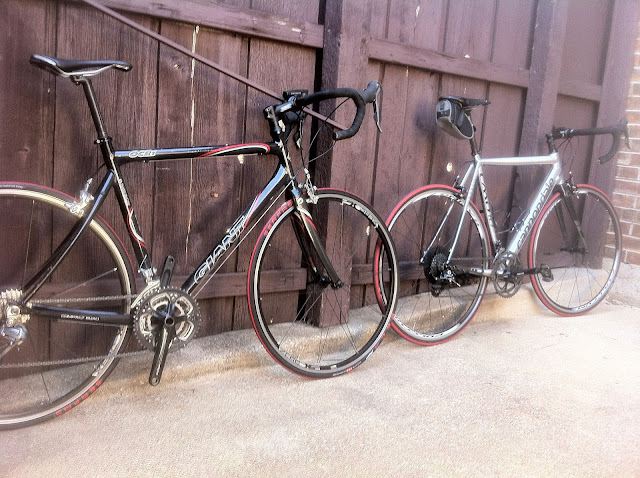 In preparation for the 2012 Texas Time Trials, I have done some work on my first road bike — a tough-tested, twice-wrecked, lightweight and compact 2006 Giant OCR 1 that I purchased at Shosies Cyclery in Loves Park, Ill. It's a fine bike with a new set of black-and-red "shoes." I am hopeful I won't have to use this bike at TTTT, but it's comforting to know I have a spare with a "granny gear" if necessary. At some point, I'd like to throw a rack and panniers onto this workhorse and use it for commuting and errands instead of keeping it confined to a closet and robbing it of parts (precisely why my Cannondale has red-and-black Vittoria Rubino Pro tires).

Well, who doesn't love new shoes? And red ones at that? Even bicycles must!

Nice work on cycling around the metroplex. You travel more by the power of your own two legs than most people drive in a day - strong work! I continue to be amazed by your dedication and your efforts.